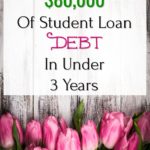 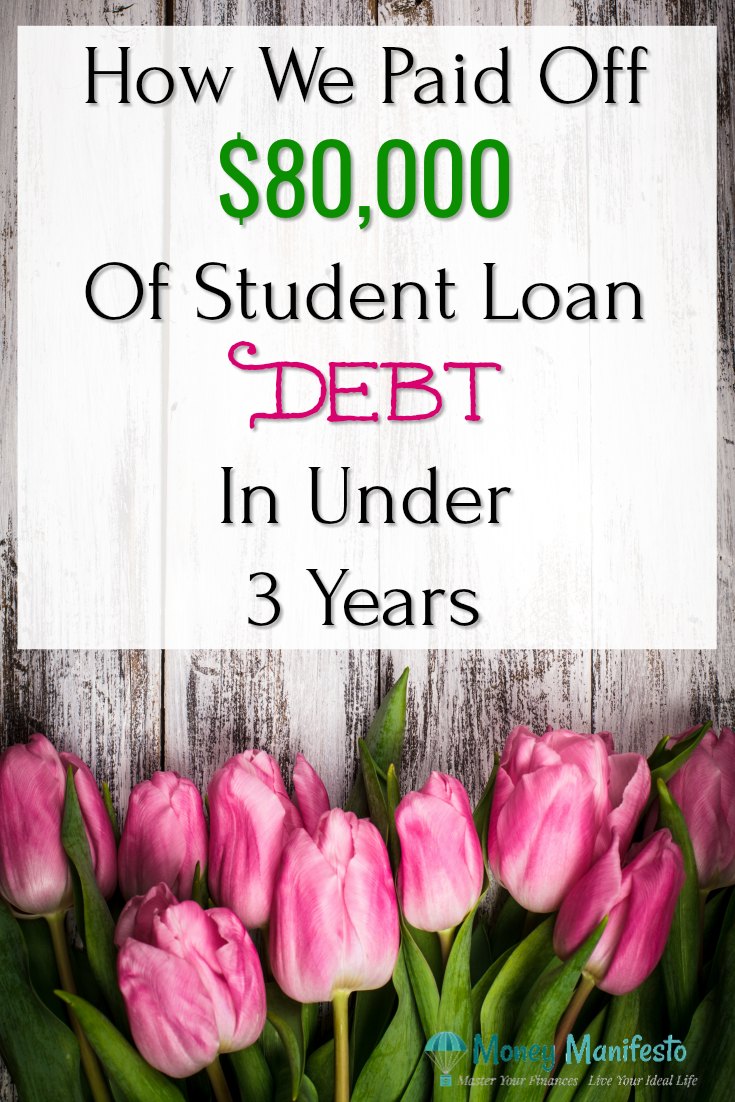 You’d normally be reading yet another student loan debt update, but today is different.

We’re finally student loan debt free after paying off over $80,000 of my wife’s student loans!

We are very excited that student loan payments are a thing of the past and it only took less than three years after my wife graduated to make that dream a reality.

Now it’s time for us to share with you how we made it happen so you too can rid yourself of your student loans or other debt forever.

Here’s our experience finding the best way to pay off your nursing school student loans.

We Made A Plan

Even before my wife graduated from Nursing school with her four year BSN degree, we realized she’d have a ton of debt when she graduated. The debt was unfortunate, but at that point there was nothing we could do about it other than figure out a way to pay off the massive burden. So we decided to sit down and make a plan.

We made a list of all of my wife’s student loans and decided to pay off the highest interest rate student loan first. It was a monster at over $20,000 and on top of that, it had an insanely high variable interest rate to go along with it. After that loan was gone we’d continue to attack her loans one at a time depending on what made sense at the time.

Next, after my wife received her first post graduation paycheck, we sat down a took a hard look at how much we’d start paying toward the loans. We decided that we’d set aside money for a frugal monthly budget that covers the basics and we’d set aside $50 a paycheck for my wife to spend on whatever she wanted. Every other penny we could get our hands on would go toward paying off her student loans as fast as possible.

Back then, we weren’t married yet so we still had separate finances. Instead of actually using the extra money I had toward paying off her loans, I put my extra money into a savings account so that when we eventually got married I could pay a giant chunk off her debt off all at once. Of course, things never go according to plan…

We Adjusted The Plan As Our Situation Changed

There were also distractions. When my wife got a job in a town an hour and a half away from my job, we decided to buy a townhouse in the new town on a whim for her to live in. The mortgage was cheaper than a car payment and I ended up getting a job in the new town, so things worked out in the end. Unfortunately, that drained us of around $20,000 of cash I could have used to knock the loans down once we got married. It was the right decision in the long-run, but at the time we were bummed to delay the student loan debt pay off.

If that wasn’t a bad enough distraction, once we were engaged we decided to move into town and buy a larger forever home. This also allowed us to become landlords by renting out the townhouse. That meant coming up with another 20% down payment. This time the consequences would be much larger. If didn’t buy our forever home, we could have paid Tori’s student loans  off in full (after we got married) with the money we ended up using for the down payment. We didn’t make this decision without a ton of analysis, but it was the right decision due to low interest rates and low home prices.

We never could have paid our loans off as fast as we did with all of the distractions and speed bumps from above just from earning a basic paycheck. So what did we do?

There was no way we could pay off my wife’s loans and accomplish the other feats we have in the past three years on just our paychecks alone. We weren’t going to settle for mediocrity when it came to paying off the student loans, so we decided to do something to try to earn some extra money. It paid off more than I ever thought it could.

We went through our stuff and sold whatever we didn’t need. That didn’t bring in a ton of money, but it was a start down the right path. On top of that, my wife picked up overtime shifts at her employer whenever she could. It was a nice boost to her paychecks and we threw all of that extra money against the loans as fast as we could.

The real money ended up coming in from a source I didn’t expect to make money from. However, once I realized I could make money from it, I started working even harder on the income source. What was it? This blog. Money Manifesto and its predecessor (Money Life and More) have played a huge role in earning extra income to pay off my wife’s student loan debt and purchase our properties. Without it, we likely wouldn’t have bought the home we’re living in today OR my wife’s student loan debt wouldn’t yet be paid off.

Even with everything that I mentioned above about how we worked hard to pay off the student loan debt, it never would have happened unless…

We Paid A Ton Of Money Towards Debt Every Month

This is the key and, while it seems obvious on the surface, it takes a lot of determination to make it happen. We paid a ton of money towards debt every month. In the beginning, minimum payments were over $700 a month and we still sent extra money in. During the rough times we only made the minimum payments, but during some of our best debt pay off months we paid off over $10,000 in one month.

We’ve come a long way over the last three years since my wife has graduated. Her student loan debt was a large part of that journey. We paid off over $80,000 in principal and countless thousands (probably $10,000+) in interest payments. We aren’t happy about the fact that we had to pay that debt off, but it served it’s purpose and my wife is an amazing Registered Nurse now. The student loan debt is now behind us and we can move on to bigger and better things in our lives and our finances.

You Can Pay Off Your Debt Too!

I didn’t write this post today to rub in the fact that we’re out of debt. I hope it inspired you in your debt journey. Paying off massive amounts of debt is 100% possible if you put your mind to it and make things happen. If we just sat back, defeated, made the minimum payments on my wife’s debt and made no extra income, we’d still have $700 in student loan debt payments today and every month for at least the next 7-17 years. I’m so glad that isn’t the case.

If you’re in debt and have no clue where to start in your debt pay off journey, then I’ve got a great solution for you. I’ve started a series on where to start when you don’t know how to pay off your debt. Check it out! I hope it helps you.

As always, if you have any questions that you think I can help you with, shoot me an email or fill out my contact me form.

Thank you all for your support throughout this journey.

Have you paid off a massive amount of debt or are you trying to pay off debt right now? I’d love to hear about your story in the comments below!

P.S. If you want weekly updates about what has been happening on Money Manifesto, be sure to sign up for our newsletter here.

424 shares
← Previous
Keep On Swimming - Debt Pay Off Update February 2014
Next →
Are Used Clothes Disgusting Or A Great Way To Save Money?
Click here to cancel reply.

[…] Lance is a licensed CPA who writes about spending smarter, earning more, and investing money.  He and his wife also paid off more than $80,000 in student loans in 3 years. […]

[…] off massive amounts of debt is 100 percent possible if you put your mind to it and make things happen,” Cothern wrote on his blog. “If we just sat back, defeated, made the minimum payments on my […]

[…] We lived like college students. “My wife and I worked together to pay off her $80,000+ of student loan debt in less than three years. Rather than living it up on our new salaries, we decided to continue living like college students while we paid off the debt. Most of our furniture was hand me downs, and we barely decorated our home and instead used all of that money to pay off the debt. I also started a blog, Money Manifesto, which earned us some extra money to put toward the debt. Now it's my full-time gig!” – Lance Cothern […]

Great Job, my wife and I also paid off our student loan debt (~200k combined) in three years, we both finished the same year but followed the same philosophy you mentioned here. We just bought our 10 year home and will probably pay off and sell around 10 years and may move to a different area depending on our future circumstances. 529 and longterm rotating CDs is the way to go when your children are born, it's like their 401k but for college, we estimated and were willing to save about 60k for their college expenses.

A huge accomplishment for you and your wife - reading this post reminded me how important it is to have a TEAMMATE for a partner. In my first marriage there was no team work and it unravelled to the point of divorce and bankruptcy. With my second wife Betty we work as a team and that makes ALL the difference.

The correlation between debt and a good or bad relationship always amazes me.