Dogs with Allergies Are Expensive! 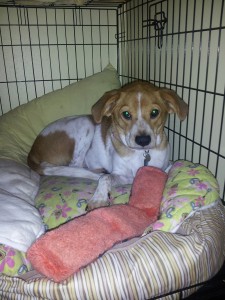 I told you the History of Daphne the Dog and how much money you can spend on a pet in a short period of time back in August. As you can likely guess, more expenses have popped up since I am writing about her again! We thought her itching and allergies were getting better at the time but they ended up getting worse… much worse.

She was doing well until the antibiotics ran out and then she started to get worse again. I’ll leave out the nasty details but she was a wreck. Her skin was horrible and she was constantly itching. She would bite her toenails to make them sharp to itch herself which just caused her to wound herself. Once we figured out it wasn’t going to get any better we took her to the vet again.

The vet said it was likely allergies and that we could try the antibiotic again so we went with that. This time it helped a little bit but it didn’t clear her up as much as it did the first time. When they ran out her allergies continued getting worse again. That was a $123.43 visit that didn’t result in any significant long term help.

Daphne continued to itch like crazy and her skin started looking worse and worse. We decided it was time to go to the vet again. We took her in and consulted with the vet yet again and covered all of our bases. The vet did a skin scrape to make 100% sure it wasn’t Mange. It wasn’t, but the test still cost us about $20.  Our dog was miserable and there was one promising, but expensive, option left that would be most likely to help her long term. We decided to get Daphne an allergy test.

We had talked to the vet before about allergy testing but wanted to explore our other cheaper options first. Nothing was working though so it was time to go with the allergy test. They drew blood and sent it off to a lab to test for the top 40 allergens in the south eastern United States. The vet prescribed a half antihistamine half steroid drug and more antibiotics to treat her horrible symptoms until the allergy test came back. All of these tests and drugs set us back $429.81 for this visit alone. That doesn’t even include the treatment serum for the allergies.

Three weeks (and another refill of steroid/antihistamine drugs) later the results came back. The allergy testing company made a treatment serum with her top 12 allergies, which were mostly weeds, dust and molds. We now have to give our dog shots every other day for the first few weeks and eventually she’ll get to one shot every 21 days. The serum, which should last a couple months in the beginning and longer when the shots are every 21 days, and the refill cost $190.00. We’re hoping this will desensitize her enough so that she can handle her seasonal allergies without any additional medications.

Total Bill for this Round

Daphne the dog has cost us $724.43 since the original post. Luckily we have money saved up for situations like these. We were able to pay for them without having to go into debt or breaking into our emergency fund. We believe this is money well spent because we don’t want her to live a miserable life. The itching was out of control and if we can do something to make it better we will.

Have you had any large pet expenses lately? If so, how’d you pay for it.

Frenchton: What Makes This Dog So Cool? – Anything French Bulldog

[…] the Bulldog side. Skin and ear conditions can also take a toll on your pocketbook. Medications, allergy testing, ear drops, culture, and baths can run a few hundred dollars a […]

Your vet only did a blood draw to find out if dust or other environmental allergies were present? I am being told that the blood is only for food sensitivity and the skin test where I am is $1200-1500!

They sent it to some lab to do analysis. Unfortunately, it was years ago so I don't remember the details.

Dogs are awesome but man that would be a tough bill to swallow! That's more than I've spent on myself for healthcare this year, haha.

My dog did have allergies! It is tough because pets are part of the family and we tend to just accept the high cost. We tried natural treatments to try to give him relief.

We haven't had any large expenses with the dogs that we have now, but we are expecting some rather large expenses for our french bulldog to be starting soon. He's around 4 years old (he's expected to only live until 7) and is a runt (which just makes it worse for his breed).

Wow that sucks. Hopefully he lives a lot longer than that problem free!