You are here: Home / Save & Invest / 5 Tricks That Make Saving for Large Expenses Easy
207shares 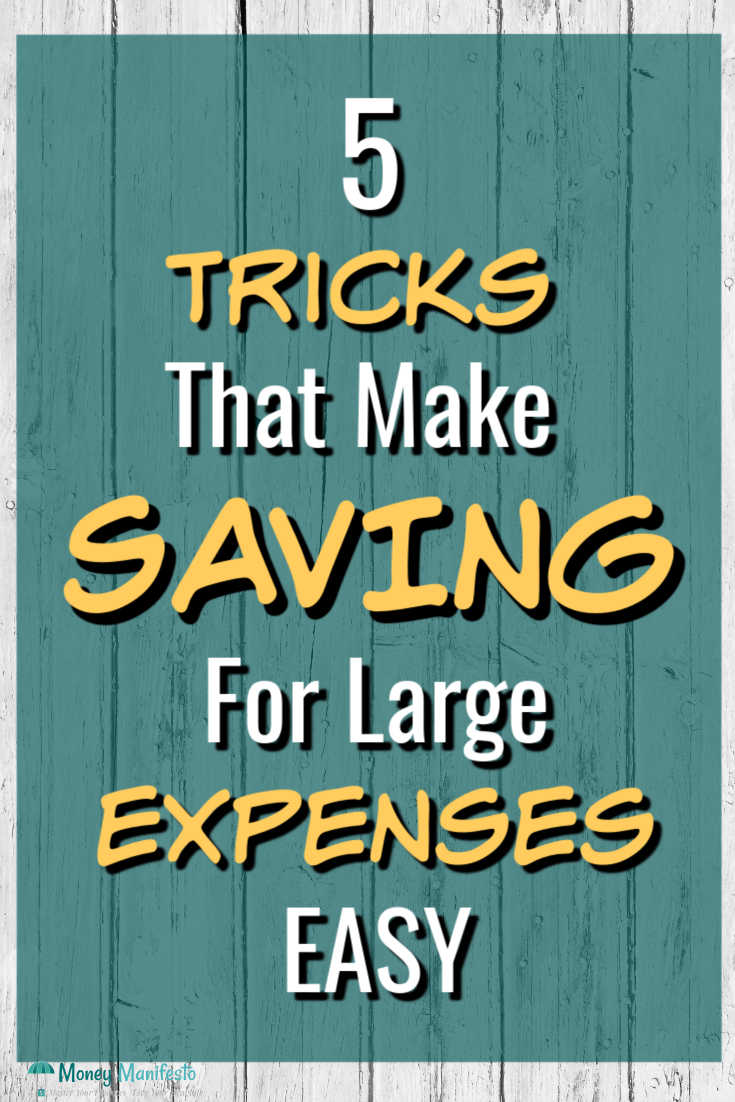 Large expenses sometimes surprise us by popping up at the most inopportune times.

More often than not, you should have planned for these big expenses to pop up.

A big home maintenance item or an expensive car repair can both be predicted in general terms.

Use these 5 ways below to start saving.

The best way to start saving for large expenses is to set up something called a sinking fund.

Essentially, a sinking fund is a separate account or amount of money that you set aside. This money’s goal is to eventually replace a big expensive item when it fails or to replace the item when you decide to get a new one.

The best way to run a sinking fund is to set one up immediately after you make a purchase that will eventually need to be replaced.

For instance, if you just bought a $20,000 car that you expect to last 10 years, you would need to start setting aside $2,000 per year to replace the car when your current car reaches the end of its life.

Calculating how much to set aside is easy. Simply take the amount you think you will need to cover the large expense and divide it by the number of months before you’ll have to replace it.

Then, simply save that much money in a sinking fund each month and you’ll have enough money for the large expense, assuming it occurs on or after when you planned for it to happen.

Another great way to set aside money for large expenses is to put your bonuses aside.

Unfortunately, not everyone has the pleasure of earning bonuses, so this won’t work for everyone. That said, if you do earn bonuses, it can get you a long way toward covering your next large planned expense.

Set Aside Part Of Your Raise

Setting aside part or all of your raises for large expenses is another great way to save. The bigger your raises, the more you can save.

For most people, you’ll need to save in other ways in order to make sure you have enough money to cover your next large planned expense. However, this will get you at least part of the way there.

Put Gifts and “Found Money” Toward Your Big Purchases

Gifts and “found money” can help you fund your large planned expenses, too. Whenever we get cash, we generally set it aside for our vacations, but you could set it aside for a new car or roof if you’d rather.

Setting aside “found money”, such as a utility deposit refunds, will add to your sinking fund even more.

Sell Items And Save Proceeds

If your large expense is just about to happen and you don’t have enough money to pay for it, consider selling items and saving the proceeds toward the large expense.

Chances are you have a ton of stuff around the house that you no longer use. Turn that stuff into cash on craigslist, eBay or Facebook Marketplace. Set the cash aside and you can pay for at least part of your upcoming major expense.

Prepare For The Future Now

Large expenses rarely just pop up. If you know where to look for them, you’ll see them coming. For everything else, you can use your emergency fund. Just don’t get caught using your emergency fund for something you should have seen coming, like a roof replacement.

Instead, use the tips above to make sure you are prepared when these large expenses hit.

« Reader Question: Should I Destroy My Debt Or Live My Life?
Should You Skip A Debt Payment For The Holidays? »